Ancient Rome had a long History of using Spies and Informants. These were seen as Political ''tools'' to manipulate Members of Government and even The Emperor. The Emperor Himself used espionage to garner information on possible ''Enemies''. The Roman Legions also used an informal systems for intelligence gathering. These were known as Frumenttarii. Far from being seen as ''dishonorable'' in their methods, The Frumentarii were seen as quite ''honorable''.

Originally, The Frumentarii were (as their name translates), ''Gatherers of Wheat''. This is thought to mean that they managed income derived from the harvesting of the crop. They may have been ''selected'' to locate such for a Roman Legion. They may have been lower Officers or Non-Commissioned Officers selected to infiltrate an Enemy Territory and ''seek out'' harvesting sources (food). This intelligence would be taken back to The Army, who would develop or revise their attack or invasion plans. The Frumentarri would obviously not be able to dress as a ''common'' Legionnaire, and possibly imitated an ''Allied'' or ''Friendly Nation'' Trader or Merchant. In this, The Frumentarii evolved into a form of ''Military Intelligence'' Agency.

Naturally such ''talents'' would also serve in Occupied Territories. The Frumentarii could ''blend into'' a Crowd into a Town or City (again in an assumed guise). They could ''take the pulse'' of a City, determining ''who was an agitator or Enemy of Rome''. They would have almost certainly recruited their own ''informants from the local Population'' to assist them. In the later years of The Empire, Frumentarri were almost certainly used by Emperors to determine who was attempting an overthrow or other ''power manipulation''. They were a form of ''State Police'' akin to the later US Central Intelligence Agency or former Soviet Komitet Gosundarstvennoy Bezopasnosti (KGB). 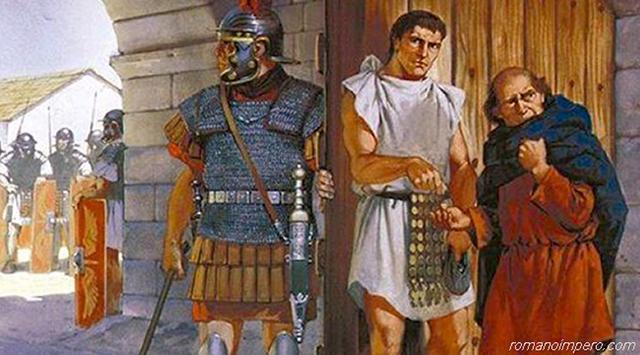