A popular 19th Century Military Uniform component, The Frock Coat grew out of The Napoleonic War and were common with most European Nations. Originally designed for Civilian Male usage, The Frock Coat was used in The Military to protect more expensive or finely embroidered Uniform Coats. Not as bulky or heavy as The Greatcoat, the Cotton (and sometimes Wool blend material) – was much lighter. The Frock Coat was originally long, extending down to the mid-Shin. For Officer Ranks, Belts were gathered around the Waist. For Enlisted Men, mostly Belts were not used. Some Armies however did use Outer Belts with which to carry Cartridge and Cap Boxes.

The Prussian and Russian Armies were among the first to field Frock Coats. They featured either a single or double breasted row of buttons, with colors dependent on The Country of issue. Although relatively “plain” with regards to decorations, most Armies began to highly embellish The Frock Coat. By the time The Frock had “migrated” to America in the 1840s-50s, it had been redesigned much shorter, extending to the mid front thigh. The creation of The “Sack Coat” is thought to have evolved from The Frock Coat. Variations are still made and used today by some European Armies, as both Ceremonial and Standard Issue Wear. 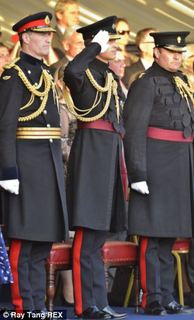