Flown from 1824 to 1864 when Mexico was a Colony of France, this Flag was used the earlier Tricolor of Green, White and Red of the former National Flag of 1821-1824. Placed in all four corners (Hoist and Fly), was the Golden Eagle and Crown representative of Napoleon III. The center White Stripe featured a much smaller version of the previous Mexican Crest (Eagle, Cactus and Lake). This was surmounted by The French Crown supported by Lattices. Used until The Revolt of May 5th 1864, when Rebel  Leader Benito Juarez fought and won Mexican Independence from France. The Nation readopted The 1821 Flag again *which it has used ever since). 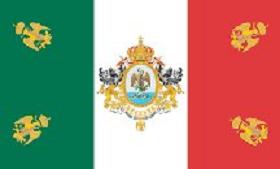