French Flagship of The French Navy at The Battle of The Nile – against The British Royal Navy (under Admiral Lord Nelson), The “Orient” displaced over 5,000 tons. Almost 200 feet in length, she featured a 50 foot beam. “Orient” (at full complement) carried over 1,000 Officers and men. She was armed with 120 cannon. Truly the last of “The Superships”, The “Orient” was the center point for The French Republic during The French Revolutionary Wars. As Flagship of The French Egyptian Fleet, she and the rest of the 40 assigned ships engaged The Royal Navy in a “running gun battle” near Alexandria, Egypt. Attacked by two English Warships (“Bedford” and “Egmont”), a “freak shot” from one of these vessels ignited The “Orient's” powder magazine. The resulting explosion was said to have been “felt” in Alexandra. This accident was credited with giving The English their victory. It was documented that only 70 survivors were pulled from the waters. The “Orient” wreck was explored in 1998. 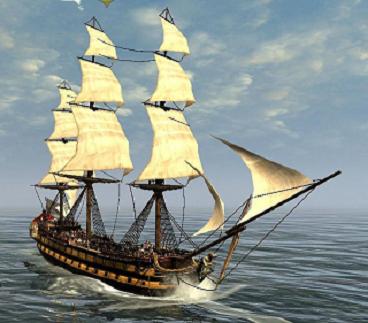