Translated from The French to mean “Vaulters” (Speed), they were created by French Emperor Napoleon Bonaparte in 1804. A type of “Dragoon”, they were used as “fast attack” Infantry. However, much as the Ancient Roman Alae (Cavalry), were first were assigned Horses to enable them to ride to a point on a battlefield, dismount and fight. With the formation of Napoleon’s “Grand Armee”, The Voltigeurs Horse were removed  (due to the reformed Cavalry deployments). Thus, they became “Shock Troops”. Seen as a combination of both Standard And Light Infantry, Voltigeurs worked well as Skirmishers. Rather than being deployed in classic Square or Linen Formations, they advanced in small groups from different directions. This caused confusion with Enemies trying to establish a Main Defensive Front.

Most Voltigeurs were excellent Marksmen, and this became a main recruiting point. They regularly held “The Left” in battle Formation  (a place of Honor). As a Military Unit, The Voltigeurs suffered heavy casualties during The Russian Campaign of 1812. So much so, very few were left. Undaunted, Napoleon reformed them into the re-Titled “Voltigeurs of The Guard”. They were nicknamed “The Young Guard” to differentiate them from the famed “Old Guard”.  Many of France’s Allies adopted Voltigeurs into their Armies as well. This form of Unit would remain throughout The Napoleonic Wars.

The Standard  French Voltigeur Uniform was Dark Green (with some Blue). Trim and Facings were Yellow. Their Shako Hats also featured large Yellow Plumage (to better identify them through the smoke of the battlefield). After 1812, the majority of their Uniform was Buff White (still incorporating the Green Coat) – as “The Young Guard”. Their last major action was at The Battle of Waterloo in 1815. Holding The Left of “The Old Guard”, Prussian Infantry all but decimated them. 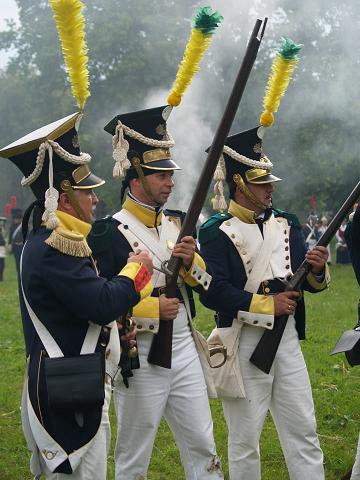