With the fall of The French Government to Germany in 1940, a sympathetic one was established to support it's German occupiers. This Government was known as The Vichy. Headed by Philippe Petain, it lasted until France's Liberation by Allied Forces in 1944. While a ''Free French'' Government continued to exist in England (and provided what help it could with the War effort using it's Army in exile), so to did The Vichy field a support element to Germany. They were known as The Milice.

A ''paramilitary force'' similar to both The Germany ''Condor Legion'' and Spanish ''Azul Division'', they saw most of their service attempting to fight Free French Forces (Partisan Resistance). The Milice were trained and supported by Germany's feared Gestapo (Secret Police). At one point, they numbered as high as 30,000. To many of the non supporting Vichy French, they were seen as ''worse'' than The Gestapo.

The Flag of The Milice was taken from the former French National Flag (a Tricolor) – of Blue, White and Red vertical stripes. Centered (within the White Stripe), was a large circle with a Black Greek Letter ''G''. This was the symbol of The Milice. Resembling a Ram, this was also the zodiac symbolism for the Sign of Aries (which meant ''Strength and Renewal''). A Upper Banner in Gold read ''MILICE”” with a lower Banner stating ''FRANCAISE''. Other variants known, were Pennant varieties, in Royal Blue (often Gold fringed) – with The Milice symbol (also in Gold). No other writing or phrases were present. With Allied Liberation and the quick disbandment of The Milice, their Flags likewise – ceased to exist. 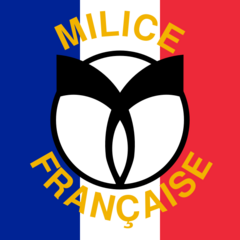