Nicknamed "The Little Toad" by French Soldiers during World War I, The Type II 58mm Medium range Mortar was a standard issue fuels weapon in The French Army in the early years of The "Great War". It's green paint and squat appearance gave it the look a the aforementioned reptile. Weighing a hefty 500-pounds, The 55mm could fire a 40 to 70-pounds shell up to 1,500-yards. First introduced in 1915, it wad mounted on a wooden sled base. This gave some ease in moving it (although it still took up to 6-men to do such). It took 4 Men to operate "The Little Toad". Unlike many World War I Mortars, The 55mm was capable of traversing and elevation abilities, which greatly increased it's effectiveness in combat (especially in the Trenches). It had a maximum elevation of 180-degrees. Experiments with mounting The 55mm on a variety of Armored vehicles were attempted  (with varying degrees of success). The "Little Toad" would remain in inventory with The French Army into the 1940s. 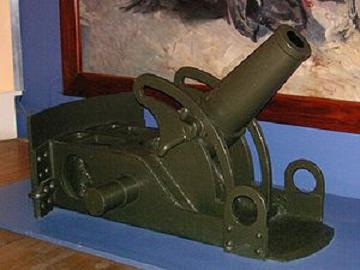