The 1953 French designed SS.11 (which was later briefly adopted in The US Army as The AGM-22 ''Toad”), was a Vehicle Mounted, Wire Guided Missile – used to destroy Enemy Armor (Tanks and related). Effective in use, over 180,000 were produced, with final deployment of The SS.11 around 1980. Considered one of the smallest in it's Classification, The SS.11 various robustly adopted into many French Defensive and Offensive Systems. A Mobile Tracked (and Manned) AMX-13 was produced, as were Platforms for Rotor Aircraft. Early deployments were also developed for dedicated Armored Trucks and related Vehicles, as well as Ground Launched versions. No known Low Yield Nuclear Warhead Devices were known to have been created for use with The SS.11.

Mostly multiple launched, The SS.11 Missile was 10-feet in length and weighed 800-pound. Quad Fin stabilized, The SS.11 could achieve 200-mph and supported a 50-pound High-Explosive Warhead. They had a 1,200-yard effective range. Upon target detection, The SS.11 Missile was “homed” via a “Line of Sight” tactic and course corrected by an attached, Radio/Electrical guided “wire”- controlled by The Gunner. Minor changes in course could be corrected. Unfortunately, major course adjustments were often no recommended with the probable Missile loss a reality. Still, The SS.10 was popular and used by not only France, but was exported to other NATO Countries as well. Despite the obvious “issues'' with Wire Guidance, The SS.11 would be one of the longest running “Miniature Missiles” deployed in The World. 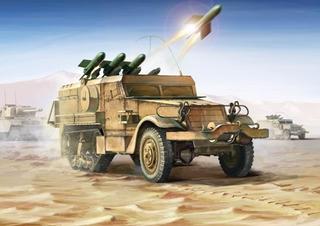