The Spahi were a form of Light Cavalry raised during The French Colonization of Central and Northern Africa in the mid-19th Century. Culled from local indigenous populations, they were originally required to provide their own horses. As such the majority of Spahi came from the Upper Class of Tribesmen. Their name “Spahi” was derived from The Ottoman term for “Army Horsemen”. Spahi Regiments were commanded by French Officers, with the majority of Non-Commissioned Officers taken from the Native Born Soldiers. This was changed to allow Native Officers (Lieutenants and Captains) to be commissioned (due to religious and cultural similarities).

Spahi were operational in Algeria and Morocco . They were deployed to several other major French Military operations in both The Crimea and Vietnam in the 1850s and 1880s. Eventually, their Ranks were to include Frenchmen from Europe “seeking adventure” Much like The Foreign Legion, and much like them, other Europeans  (and even some Americans joined their Ranks as well). The Spahi were noted for their flamboyant Uniforms, based in part on The French Zouave style. The loose fitting Uniforms were seen as practical, due to the intense weather variants of The Desert  (hot and cold). They were also known for their adaption of the previously mentioned Burnous Cloak.The Spahi also used the traditional French Red and Light Blue colors of The Cavalry.

The Spahi carried Saber and Carbine traditionally. With the advent of World War I, many such Spahi Regiments were converted over to Mechanized Units. With “Trench Warfare”, many Spahi were used as Infantry. It was also by World War I, that The Spahi changed to a Tan/Khaki Uniform  (still retaining The Burnous Cloak). Spahi Units still exist in The French Army as both Active Mechanized and Ceremonial Units, today. 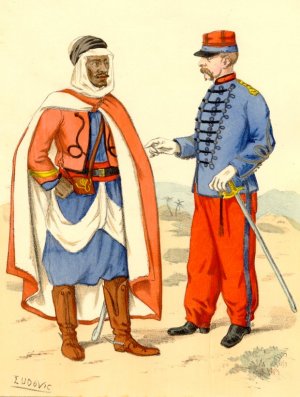