An early French Fighter Interceptor, The SNCASCO 9000, or ‘’Trident’’ was originally conceived in the 1940s. World War II stopped future production (until picked up again in 1953). The “Trident’’ was a supersonic Fighter, designed to launch from ground assets. With the re-building of The French Military after World War II and Soviet/Communist threat in Europe, such Fighters were a requirement. Totally French designed and built around 1953 , The ‘’Trident’’ was piloted by a single person. It was 45-feet long with a wingspan of 27-feet. Powered by twin Turbomeca Marbore Turbojets, the rocket fueled jet engine produced over 2,000-pounds of thrust for each. Speed was rated at over 1,000-miles per hour (Mach 1.6). (3) Variants were produced with a total of (12) prototypes manufactured. The massive cost of each quickly halted further development (1957), with France deciding to purchase Foreign-made Fighters instead. 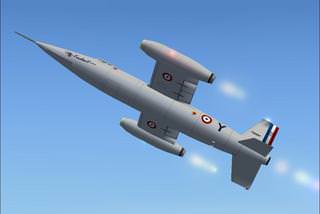