Developed in 1917 (with a production run until 1945), The Schneider Howitzer was the primary Medium Howitzer of The French Army during World War I. Durable and reliable, many countries (including America and Great Britain) – included her in their weapons inventories. Even The Germans (capturing many during World War II) – incorporated them into their Coastal Defense Systems. This howitzer weighed around 7,500 pounds. Built in the 155mm (or 6.1-inch) version only, it featured an innovative hydro-pneumatic recoil system. Capable of a cyclic rate of 3 rounds per minute, The Schneider Howitzer had a maximum effective range of over 12,000 yards. A “long barrel” version was made – exclusively for use by Russian Army buyers around 1915. 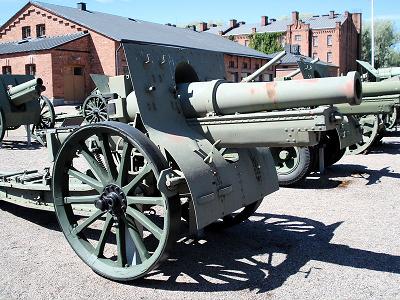