As previously discussed, improvised Trench weapons were developed for the close quarters combat of World War I. Innovative, such weapons and devices would go on to form more Modern weapons. One such, The French Sauterelle, was actually based on several Centuries old Medieval devices - The Catapult and The Crossbow. Reaching it's popularity between 1915 to 1918, The Sauterelle was made by hand, of wood and metal. As a result of thus, most Sauterelle weapons had different ranges. In essence a "Giant Crossbow", The Sauterelle could deploy and explosive from 120 to 150-yards. Placed at an angle against a Trench Wall, this practice served as stabilization.

Weighing between 50 and 70-pounds, a Sauterelle also ranged between 4 and 6-feet in length. The were armed by pulling the wire bowline with a Windlass, rearward  (under tension). Once locked, a Plate or Holding Cup held a variety of small Grenade devices. At the determined moment a simple spring release sent the explosive down The Sauterelle track - "up and over" a Trench Wall. The Sauterelle was very effective first close quarters engagements and mass Infantry Charges. 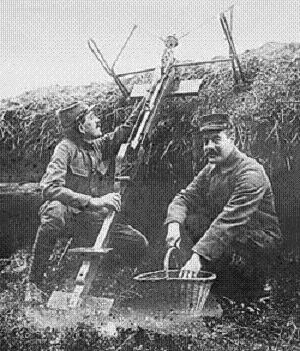