Better known as The "Ruby", this was France's first fully automatic Pistol used during World War I. Designed from The Browning Model 1903 Auto Pistol. In addition to France - Belgium and Spain also had license to produce the over 750,000 that were manufactured between 1914 to 1916. Chambered for a 7 mm round, The "Ruby" could also use the .32 Cal. shell. A metal ammunition slide clip held 9 rounds. The "Ruby" had a 30-yard effective range. Relatively "light" at slightly over 1-pound, over 50 variants were produced. Some examples were known to still be used by both Spanish and Italian Socialist Forces during the early years of World War II. 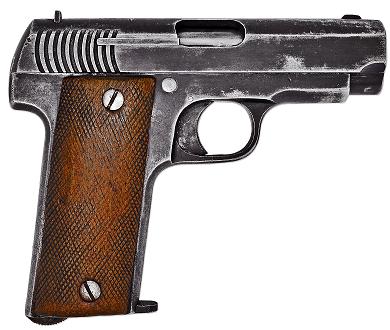