These primitive wrought-iron small cannon were seen around the early 15th Century (mostly in France). Part of The Swivel Gun family of weapons, The Bolt was a breech loading weapon with a powder chamber quite similar to a modern beer mug. This weapon was a first attempt at breech loading (by dropping the shells into the rear breech chamber). It fired a .40 caliber ball and weighed several hundred pounds). The Bolt was very fast to load and deploy. Unfortunately, it's design flaw was that it leaked powder (thus creating problems with accidental explosions for crews). The Bolt was seen mounted on warships of various types. They could be used in fortifications and castles as well. The Bolt (although primitive), was reliable and it would continue until the 19th Century in some Western European Countries. 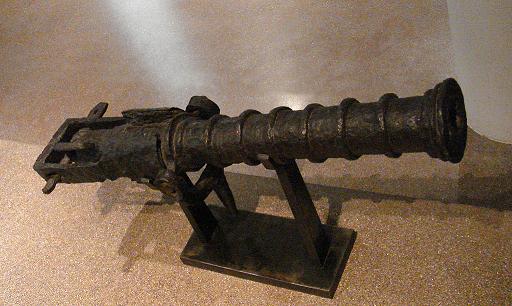