Designed in 1909 by The Peugeot Motor Carriage Company, their Mitrailleuse Armored Vehicle was built off a standard Peugeot automobile. By the start of World War I production (1914),  they had developed a 0.21-inch plate that encompassed the entire vehicle. Supported on 4 pneumatic vulcanized rubber tires. Weighing 5-tons, The Peugeot featured a fixed Turret Cowl on a semi-opened roof. Capable of crewing 4 to 5 men, it's primary armament was the Hotchkiss Model 1909 7.90mm Machine Gun. Later in The War, a Puteaux 1.45-inch Cannon was installed. As a 4-cylinder, The Peugeot could achieve 25 mph land speeds. It was capable of a 35 mile operation range on one Tank of gas. Considered reliable by the French Army, some were sold to Belgium and other Countries. However, only 270 were built and, due to the influx of other better armored and faster models, the manufacturing of The Peugeot Automitrailleuse was stopped. 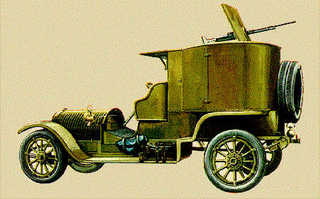