Established in 1693 by King Louis IX. Awarded to Nobility who had displayed “exceptional” merit to The Kingdom and Monarch, it was also one of the first Awards of Order given to “non” Nobles (or Commoners). It was the predecessor to France's “Legion of Honor”. Although The King was considered Grand Master (so was The Dauphin), when so Titled and a Holder (which was automatic). The Titling of Grand Cross Holder, Commander and Chevalier were used. Originally, only a Male of good standing in The Catholic Church and with at least 10 years of Service in His Majesties Navy or Army could qualify. Abolished in 1830. The Badge was a White Maltese-type Cross, with The King's image. The Gold French Fleur-de-Lys (in Gold) surmounted the White Cross. A Crimson Red Ribbon was used as either a Sash Version or Neck Version – were known to exist. The Order was not issued to Foreigners. 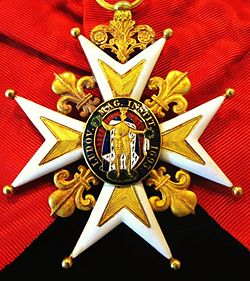