They were the backbone of Napoleon's "Grande Armee", formed in 1804. The Old Guard Regiment consisted of 2 Battalions of Infantry and 2 Battalions of Chasseurs (cavalry). They were payed more that the basic French Infantry Unit. All applicants had to at LEAST 6 foot 1 inch tall, with at least 10 years of service. Additionally, they had to have fought in at least 3 battles (although 12 seems to have been the norm). These soldiers were battlefield tried and tested. They were at the apex of France's most motivated and disciplined troops. They were also masters of The Bayonet. They fought in all 6 of Napoleon's "major" battles. They used the standard musket and used the same Infantry equipment that other standard Units used. They were distinguished on the battlefield by their "Bear Skin" helmets. The cavalry portion of The Old Guard (Chasseurs), were used less in battle and more for The Emperor's protection when he was on the battlefield. They also protected Headquarters and other Field Marshals. The Old Guards most famous battle was of course, at Waterloo (1815). They formed (550 of them) in several Infantry Squares (the preferred tactic of the day), and advanced with the intention of breaking The Duke of Wellington's center (battle line). They were raked by artillery. Finally, at their "high water mark", some 1,500 hidden British Foot Guards simultaneously (as legend goes), fired point blank. They were decimated. Even with the help of their mounted Chasseurs (who suffered greatly as well) - they had to withdraw. Done in good order (even by British accounts), it was said only 25 returned to the French lines. The survivors were disbanded in 1816 by the New French Government. It was said that when Napoleon died in 1840 (in final exile) - and returned to France for burial, several aged men in tattered Old Guard uniforms - accompanied his remains. 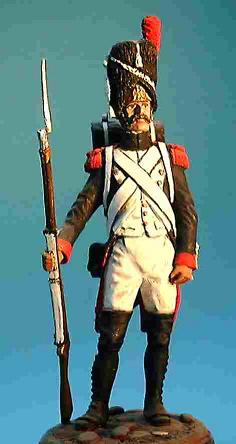