Developed in France in 1853, this gun was named for Napoleon III. A highly popular artillery field piece with many European Armies, they were extremely popular in The United States (as it's primary field weapon). The English preferred them for their mobility in combat, and used them with great effect during The Crimean War. The barrel was cast in bronze and weighed 1,227 pounds. With it's attached carriage weight - it topped off at some 2,400 pounds. The Napoleon fired a 4.5 to 5 pound solid, hollow or canister shot some 1,400 yards. It had a 4.62-inch bore diameter. It is a common misnomer that the piece is referred to as a "12-pounder". In France, it's caliber conversion is 12cm. When first imported into The US (1857), they simply mistook the number, and dubbed it "the 12-pounder".

Subsequent American made pieces simply followed suit. The Napoleon was a mainstay of both The United and Confederate States of America, during The Civil War. Both sides made their own, with The Confederacy either making "their" version with a smooth, non-swelled muzzle (The North incorporated a swell) - or they used the captures guns from former Federal Armories. The Napoleon normally took a crew of 4 to operate, with possibly 2 more to maintain the attached ammunition caisson. The it took normally 2 horse (or mules) to pull both. A Federal Napoleon battery consisted of 6 guns (in the beginning) and in some cases 8. The South's Batteries were 4 guns (becoming as little as 2 towards the end of the war). Napoleon barrels were NOT rifled and are considered smooth bore weapons. Even with the development and deployment of rifled artillery, the Napoleon was still kept in service. It was phased out of service in France in the 1870s and lasted until the 1890s in America. 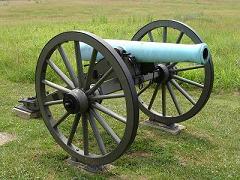