Produced late in World War I (1917). The French ''Fusil'' 50mm Automatic Rifle was an early automatic Infantry firearms. Over 80,000 were produced. Disliked due to it's weight and overall handling (especially in the tight confines of Trench Warfare), problems with dirt in the components caused many misfires – until properly cleaned. The attached Ammunition Clip was deemed too long. All and all The Model 1917 Fusil was NOT popular. Despite this, The Fusil would remain in French Inventory until 1926 (although some were used by Free French Forces in World War II). Weighing 12-lbs, The Fusil was 55-inches in length and fired a 50mm Round. Gas operating, they chambered a 5-Round Clip, with a maximum effective range of 2,300-yards. 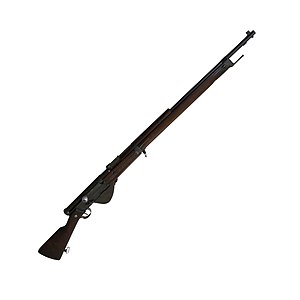