Seen as the first double-action Revolver manufactured for The French Army in the mid to late 19th Century, The Model 1873 (abbreviated as The “MAS”), was an 11mm Handgun that was first deployed during France’s Colonial Wars. The Franco-Prussian War (of which France lost), showed her Army the need for a reliable handgun, deviating from the then still in use, Blackpowder (Cap and Ball) versions. Although the invention of brass ammunition was becoming the norm, Pistols and Revolvers were still in a stage of evolution towards a standard cyclic operation in many World Armies.

Basing the design on German Models, designers Chamelot and Delvigne developed The MAS Revolver for Army use in 1870, with it’s deployment in 1873. A large frame Revolver, The MAS weighed slightly over 1-pound and held 6-rounds in it’s cylinder. It had an extremely superior maximum firing range of 300 yards (unusual for a handgun of The Era). It was most effective however at 50-yards.

Popular in The Army, most French Police Agencies adopted The MAS for Service use. Although replaced by the start of the 20th Century, The MAS still proved popular and was seen in heavy use by French Army Officers and Cavalry Forces in World War I. Many French Guerilla Fighters also still retained The MAS as late as World War II (1940). 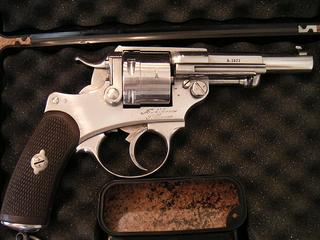