A true innovation in “combination weapons”, The LeMat Revolver was truly a multi-purpose device. Invented in New Orleans, Louisiana (US) by Jean Alexandre LeMat, in 1856. He wanted to created a weapon that could effectively engage multiple targets of varying difficulty or need. The primary chambering if the LeMat was the cap and ball .36 caliber shot (similar to the popular Colt Naval). However, in addition to the pistol capabilities, LeMat fashioned a .410 Gauge Shotgun barrel (around 4-inches long) – directly under the primary revolver chamber. Unlike most “revolvers” of the period, The LeMat featured 9 chambered shots set in a rotating chamber. LeMat had considered a .20 Gauge Shotgun shell (called A Grapeshot round then), but the recoil force was prohibitive. Selection between revolver and Shotgun was a simple matter of a lever located near the firing hammer.

It is estimated that before The American Civil War, LeMat got roughly 2,900 LeMat orders shipped to Europe. Strangely, only 100 odd were produced in America (with half that number made in The North). The LeMat weighed a little over 3-pounds and was a respectable 14-inches long. Effective to 40 yards, the gun “touted” a maximum effective range of 100 yards. Originally financed by soon to be famed Confederate Civil War General Pierre Beaureguard, he used his connections in The US Army to market the LeMat to Dragoon Units. Unfortunately, The Civil War began. The weapon was greatly prized by many Southern cavalrymen (in part to it's durability). European contractors to LeMat were able to smuggle in some 2,500 revolvers through the Federal Blockade for use in Europe. The LeMat was the primary sidearm of General James Stuart (another cavalry Officer of renown). Very rare prototype Pinfire versions were made. After The War, variants of The LeMat design began to appear in Europe. 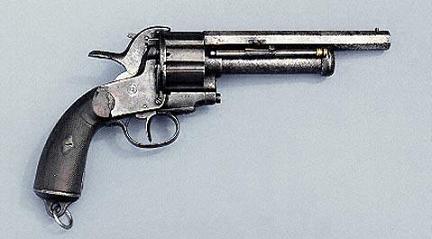