The French "Lances Fournies" were a 12th Century Fighting Unit, originally created to provide protection to Mounted Gendarme Heavy Cavalry. Although considered "Common", they were not "Peasant" Recruits. In most cases, The Fournies were trained and experienced Soldiers. When not pressed into service by a Nobleman  or King, they had other employment (Farmers, etc.) They wete more doubt a first example of a "standing" Militia.

Commanded by a "Sergeant" or "Man at Arms", The Lances Fournies did not wear Armor. They mostly used heavy Gambeson or a type of Arming Coat. They wore a broad variety of Helmets for protection. Their primary weapon was The Short Lance (a Field Spear type weapon). Their goal was to provide a "screen" for Gendarmes, as well as attempting to protect them if they "fell". Some Fournies did use Shields (a variation of The Rondache). By the 14th Century, The decorative Parish Shield was preferred (due to Arrow and Bolt use). Considered "Melee Troops", they were not much seen after the end of the 15th Century. 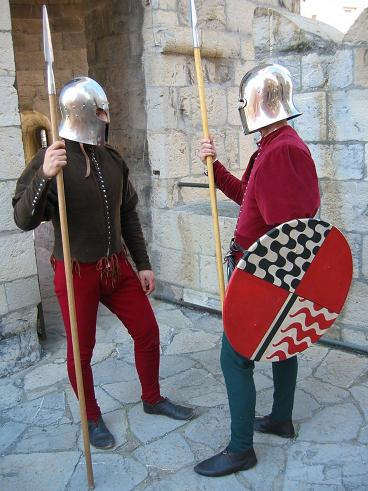