The French Lance Model 37 50mm Light Mortar was developed in 1937 as a support weapon for Infantry field usage. With most Mortars heavy and cumbersome, The Model 37 was among one of the lightest fielded by The French Army prior to World War II. Over 22,000 were produced for The Army. After German Occupation of France in 1940, many were captured and incorporated into The German Army there. After the War, many were retaken by The French Army and still deployed. The Model 27 was last used during The 1st Indochinese War (1946-1951). The Mortar weighed 8-lbs. With a tube only measured at 16-inches (both factors making it such a popular and last lasting Infantry support weapon). Tripod support mounted (with an absorbing rear shock plate), it had a 250-ft. effective range. The maximum was rated to 1,500-yards. The Mortar could support a varied ammunition supply, to include anti-personnel and high explosive rounds. 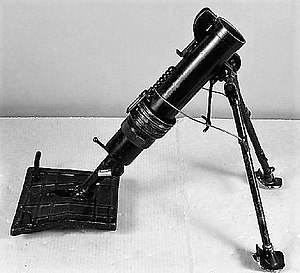