Built by The French and launched in 1859, The Gloire was one of the first ironclad-type warships built in The World. Designed to incorporate the “latest” in naval technology, Gloire was a steam powered ship that used a total of 8 boilers. She was 256 feet long and weighed over 5,000 tons (displaced). Her beam (height) was 56 feet. Gloire was capable of a speed of 15 miles per hour (roughly 13 knots). She was also capable of sail propulsion (in the event of boiler/steam malfunction). Gloire crewed around 570 Officers and men. She was originally armed with 36 cannon (ranging from 32 to 110-pounders). The French Navy considered her a response to Armstrong and Dalhgren Guns of England and America. These guns were extremely effective against the standard wooden ships of the day.

Gloire, being partially ironclad, sported 5 inch think armor plates reinforced by 17-inches of wood. During tests, she resisted a British 65-pounder shot effectively. Still built in a traditional ship configuration, she was rendered obsolete by the British HMS Warrior (built in 1860) and the first totally iron-hulled warship. Gloire was kept in inventory with the French Navy until 1879. she was scrapped in 1883. 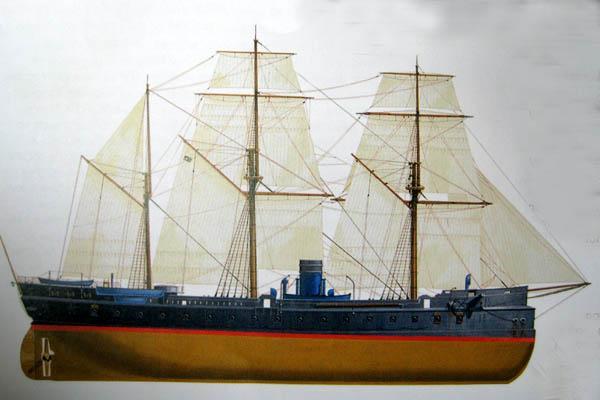