France was one of the last of The Allied Nations that chose to not to adapt to a more “Modern” battlefield uniform. Initially at the onset of The War, France maintained it's 1870s-1890's “Blue and Red” color scheme (as well as it's iconic Kepi Hat). Red trousers are very easily seen (even in fog), and many French Soldiers began easy targets for enemy riflemen and machine gunners. By 1916, The French had stopped the use of Red Trousers, creating a matching Light Blue trousers (matching the issued Tunic and Greatcoat). The Kepi was still retained for “non-combat” wear – but The Adrian Helmet became the standard wear. The French soldier used a very similar Load Bearing Systems for his equipment as did his Allied components. This uniform would be phased out after The War for the new OD Green and Brown combinations being used by other Countries. 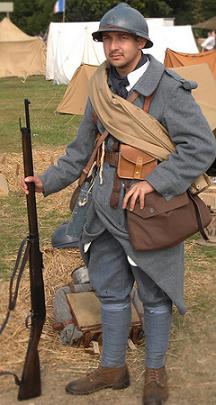