Created late in The Napoleonic Wars, The Mounted scouts of The Imperial Guard were a Light Cavalry detachment. They were raised in 1813, after Napoleon noted the excellent Cavalry skills of The Russian Cossacks – during His retreat from Moscow. The Scouts were formed into (3) Regiments of 1,000 Officers and Men each.

The primary Mission of The Imperial Scouts was to to provide mobile Skirmishers and Pickets for The Imperial Guard Regiments. They also preformed traditional Mounted Scout duties such as intelligence gathering, taking prisoners and finding appropriate roads and paths.

The Imperial Scouts were disbanded in 1816 by French King Louis XVIII. 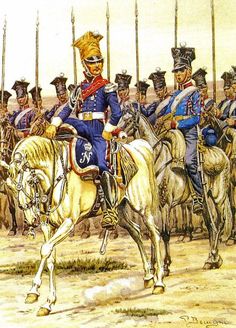