While The ''Aquilla'' (or Eagle) was the accepted Standard of a Roman Legion, the practice would be revived by Emperor Napoleon Bonaparte. In 1809, after His Coronation as Emperor, He awarded ''Imperial Eagles'' to His Guard Regiments. Much like their Ancient ''Cousins'', these Eagles were ''perched'' on small platforms (wings outstretched). They were mounted to a wooded Staff (6 to 8-feet) and carried before a Regiment, much as a Regimental or Battle Standard (although these were the initial issue as well). Much as in Ancient Rome, it was unthinkable for a Regiment to ''lose'' it's Eagle. They were guarded in battle with great relish – even to the point of sacrificing one's own life to protect it.

Each Platform featured the numerical identifier of the particular Regiment The Eagle represented. He were constructed of wood, covered in Brass. Typically, an Eagle was 12-inches in height. As much as they were protected, was as much as they were sought by Enemy Forces. After The Wars, King Louis XVIII (of The Restored Monarchy) – ordered all known surviving Eagles gathered and destroyed. Only a very few escaped (a few taken as War Trophies). 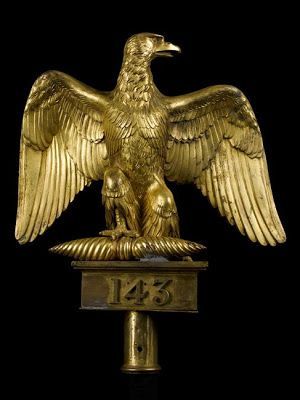