The French Foreign Legion was created by King Louis Philippe of France in 1831. The initial idea of the Units formation was to remove disruptive elements from society and put them to fighting against the enemies of France. Originally opened only to French recruits, soon candidates from all over Europe began to enlist. Royal Articles of Formation were amended to include this, providing these men served "outside of France". The Legion's first order of business was the control of French Colonies in Algeria and other parts of Northern Africa (which would be the Legions home for 130 years). They served in The Carlist Wars (Spain) and with distinction during The Crimean War (1850s). They also participated in The Italian Wars for Independence and The French Intervention in Mexico. It was here The Legion earned their legendary reputation of "To The Last Man" and "March or Die!". After Mexico, The Legion was sent into The Franco-Prussian War and saw extended service in the 1880s in Southeast Asia (Tonkin and The Sino-French War). The Legion served with great distinction during World Wars I and II - as were again sent back into Southeast Asia in the 1950s (French Indo-China). The Legion still functions today as an ultra-elite fighting force with grueling training standards required to earn the title of "Legionnaire". 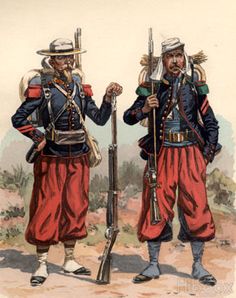