Formed in 1813 under direction of Napoleon, the theory behind The Flanking Regiment, was a Formation of Soldiers specially trained to protect an Armies Flanks (or sides). Further, they were trained to exploit an Enemies Flank by attempting to keep sustained fire on the sides of an Opposing Force. This allowed ''Shock Troops'' or Heavy Cavalry Units as well as reinforced Infantry to attack The Front.

The French Flanking Grenadiers were formed into (6) Companies of roughly 1,600 Officers and Men. They were dressed in Green and White Uniforms, trimmed in Red. They Carried basic Infantry Musket and Bayonet. Officers carried Sword and Pistol. The Flanking Grenadiers found in most of the major Battles of 1814, even taking part in The Defense of Paris. With Napoleon deposed and The French Monarchy re-established, The Flankers were disbanded (1815). 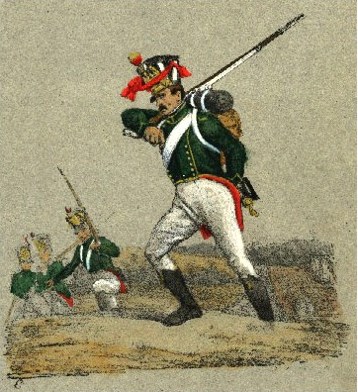