The unusual ''Conscript Grenadiers'' of Napoleon Bonaparte's ''Grand Armee'', were formed in 1809. As we have seen, The ''Grand Armee'' was made up of several Elite Guard Regiments. These were The Old, Middle and Young Guard. The youngest and less experienced was The Young Guard. Napoleon thought to augment His least experienced Guards with Conscripts. As we have seen, Conscription involved the recruitment of extremely poorly disciplined and often poorly trained Civilians, forced or conscripted into Government Military Service. Napoleon sought to take the ''best'' of these ''Soldiers'' and elevate them to ''status'' consistent with His Guard Regiments.

Only (2) Grenadier Companies were raised. Against the traditional custom of using only ''tall'' men as Grenadiers, The Conscripts were men of ''average'' size. They were equipped and paid in line with a Regular, Non-Imperial Infantrymen. They were afforded better Uniforms (Green and White) and equipment. The primary goal of The Conscript Guard was to serve as a form of Reserve Force to The Young Guard. In time, they could be moved into The Young Guard, after proving themselves ''worthy''. 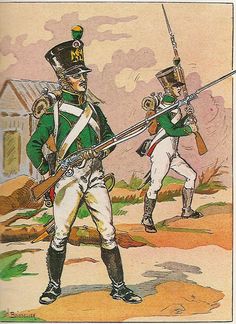