Originally designed for use by The French Army during World War I, The Chauchat was also incorporated into the US Army inventory upon their arrival to France – during The War. The Chauchat Gun was “light” at 20 pounds. Using the 50mm Round, it had a cyclic rate of 240 rounds per minute (belt fed). The weapon had a maximum effective range of over 2,000 yards. Similar versions were re-chambered for the .30-06 and 7.65mm rounds. Often considered “the worse Machine Gun in history”, it suffered from jamming issues due to the excessive mud it was exposed to. It could be carried by a single operator or used on a Tripod mount. Despite it's ”reputation” - The Chauchat saw service up to the mid 1940s. 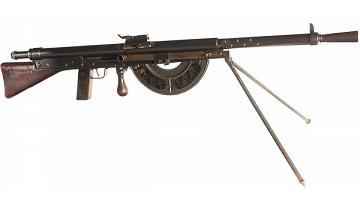