Considered early “Feudal Cavalry”, the term is meant to identify both Italian and later French Cavalry who were not as well trained and were often classed as “Inferior”. They were later classed as Irregular Cavalry around the 18th Century. Some Cavalleggeri would become better trained and equipped. This was most evident with French King Louis XII in 1498. Early versions of Cavalleggeri carried only “Long Knives”, Spears, Crossbows and pretty much any other type of weapon into combat. They were known to also dismount after a short charge and fight dismounted. In Italy, many Cavalleggeri were recruited into The Mercenary Companies known as The Condotiere (1600 AD). By this time, they were better paid and armed with early Firearms. In this deployment they were more akin to early Dragoons. By 1799, French Dictator Napoleon Bonaparte recreated a Cavalleggeri Branch, but wished them to fight as Lancers. 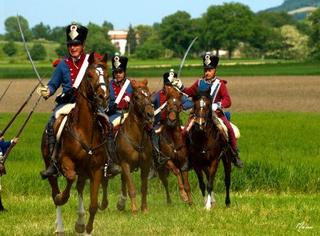