Originally a form of Light Infantry, The Carabinier were Line Troops who used the shorter Class of Musket known as Carbine. First seen during The Napoleonic Wars of the 18th Century, with the reforms to French Cavalry, they were deemed more effective as Mounted Soldiers. Used as Mounted Skirmishers, they had to get much closer to an Enemy as a result of their Carbines (which had a shorter range). They also used Saber and Pistol. Dressed similar to the famed Cuirassier Heavy Cavalry, Carabinier Forces also adopted a Cuirass. Theirs were made of Brass, and had a typically Gold hue. They too used a type of Caterpillar/Comb Helmet (again Gold hued). These featured a large curved Plume, Red in color. Carabiniers wore Light Blue as their Branch Color. Late in The Napoleonic Wars, The Carabinier stopped using Carbines, and assumed a more traditional Cavalry role in battle. They were often deployed in captured Territories as a form of Provost. They enforced Imperial law and edicts, as well as Military Regulations. They would eventually evolve into a Regional Police Force, still found in some Countries today. 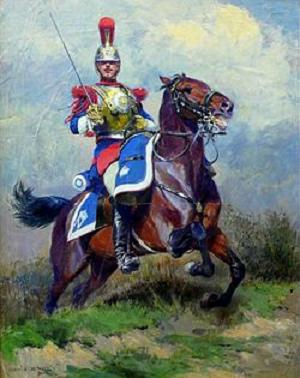