Named for 17th Century French Privateer Jean Bart, The Battleship “Jean Bart” was launched in 1940 and was the last French Built Warship before World War II. A “Richelieu” Class Battleship, The “Jean Bart'' featured state of the art technology for The Era. Unlike traditional Battleships of The Era that used Quad or Tri Main Gun Systems, The “Jean Bart'' used only (2) Forward Beck Main Gun Emplacements with no other at Her Bow. The ''Jean Bart'' was 35,000-Tons. She was 800-feet and had a Beam of 108-feet. Capable of 30-mph on open Sea, (6) Boilers powered (2) Steam Turbines (with plans to convert to Diesel). The “Jean Bart” Crewed nearly 2,000 Men.

Her Main Guns (8), were 380mm along with (9) 155mm Guns (8) 40mm Bofors Guns and (20) 20mm AA Guns. Moored in Casablanca, Morocco - The ''Jean Bart” was captured by French Vichy Forces. She was attacked by both Allied Fighters and The USS ''Massachusetts” (Battleship), damaging her Main Guns, in 1942. Repaired, she was again attacked by Dive Bombers of The American Aircraft Carrier ''Ranger''.

Severely damaged, when Casablanca was captured by Free French, ''Jean Bart'' was moved to The United States and refitted. She was moved back to Casablanca as a floating “Harbor'' Battery. After The War, ''Jean Bart” was placed back into French Naval Service and was refitted many times with numerous weapons upgrades. She was decommissioned in 1968 and eventually scrapped. 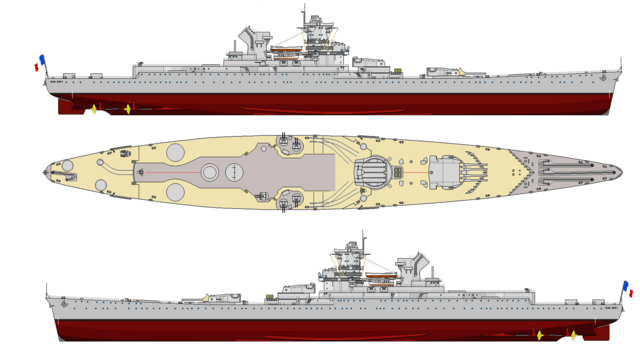