The French Aerostatic Corps. Was a Formation of The 19th Century AD French National Army. Formally created and given autonomy in 1794 by Napoleon Bonaparte, The Corps. Was among one of the first such to employ Balloons in Warfare (as a means of reconnaissance). First attempted in 1793, their worth in battle was quickly seized by The Emperor. Consisting of 25 Officers and Men, The Corps. used hot air balloons (maintained by wagons and supply tenders). Raised high over a region, The Corps. Could make detailed observations of Enemy positions and advances and relay them to the ground via signal. The Corps. Fought in (6) Major battles, before they were disbanded in 1799 (although one Company would continue to serve until 1802). And while they served a valuable purpose in early battlefield communications, their costs and maintenance were seen as ultimately better spent on more traditional Army Units. 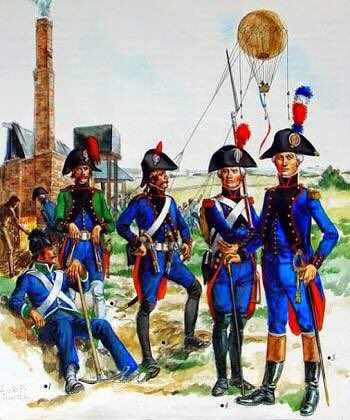