The French Aasen 3.5-Inch Mortar (also known as a "Gun Mortar"), was designed by Norwegian Arms Inventor Nils Aasen, in 1915. Although deployed with The French Army during World War I, The Aasen Mortar was heavily used by Imperial Russian Forces, as well. The Aasen could fire a 75mm Rocket-type Shell or smaller Grenade explosives. A Crew of 3 Soldiers could fire 4 to 5-rounds per minute. The Mortar Tube was over 4-feet long and it had a maximum effective range of 400-yards. The Tube was affixed to a steel bar "A"-Frame front mount, with a third stabilizing bar at it's rear. Both mounting bars were supported by Base Plates. Unlike most Masters of The Era, The Aasen has an elevation ability of 169-degrees. 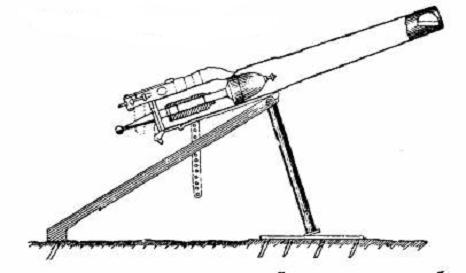