An Elite Light Cavalry Unit of Napoleon's French ''Grand Armee'', The 4th Hussars Regiment was raised in 1783. They served as a Colonial French Mounted Force in The Caribbean. Later they were used as a Light Cavalry Force. Most European Nations had, by the 1790s – created some form of Light Horse Cavalry, seen as a method of creating speed on the battlefield. The 4th would go on to gain honor in The Egyptian Campaign (1798), and further fight in Belgium and Norway. Although most French Units loyal to Napoleonic ''principle'' were disbanded and reorganized after Waterloo (1815), The 4th Hussars were not. The Regiment (converted to Armored Scouts), would be stationed in Africa – and later be disbanded in 1964. It was reformed again in 1991 as a Support Regiment currently in The French Armed Forces.

The Napoleonic, and most stylish of The 4th Hussar Uniform is best remembered. They wore the wool Blue Uniform (form fitting), which was trimmed in Gold and Red. They wore the Short Pelisse Jacket (as was common for all classes of Hussars throughout Europe). The 4th used the standard Shako Leather Hat. Light Cavalry Sabre (1796 Pattern) and Carbine were the weapons of choice for The 4th Hussar. Pistol (normally two), were preferred). The Standard of The 4th Hussars was based on the Standard French Grand Army format of Blue, White and Red. A large White Diamond was flanked by Quadrants of Red and Blue, often augmented by Gold embellishments. Unit Identifiers were placed within The Diamond (in Gold). In the case of The 4th, this read ''The Emperor of France's Own, 4th Hussar Regiment''. This Standard was not a Guidon, but quarter size to a traditional Regimental Flag. 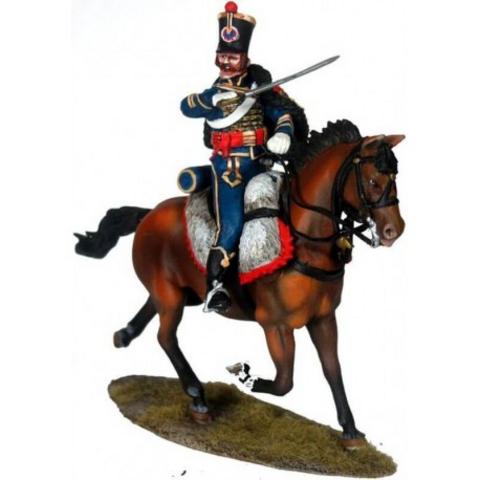