An early French Reconnaissance/Light Bomber, The HF20 first flew in 1913. The Bomber was long at 32 feet with an immense wingspan of 53 feet. The twin-seater Bi-Plane was capable of 68 mph and had an operational ceiling of 11,500 feet. Due to The HF20 being a primary Reconnaissance plane, it was not equipped with armaments. As a Bomber, it carried only 150 pounds of explosives. Seen in heavy use in the early War, by 1915 - innovations in air technology, made The HF20 obsolete. It wad still used as a capable first air trainer in France. 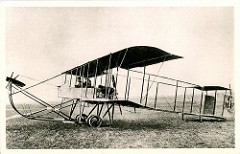