Born Jean-David Nas, possibly in 1635, the Pirate known as Francois L'Olonais was known as one of the most ruthless and blood thirsty Pirates who lived. Not much is known if his early life, other than he was poor. As was common, he "sold" himself into "indentured servitude" in his Teens (possibly to a Merchant Ship Captain. Making his way to The Caribbean, by the 1650s, his "contract" was finished and Francois was a Free Man.

At some point, he joined a Pirate Crew out of Haiti. It was during this phase in his life, that an incident occurred to forever changed him. His Ship and crew were taken by a Spanish Warship. The majority of the crew were thrown over board to drown. However, a small group (including Francois), were taken to a small Atoll and suffered many "tortures and perversions". Francois escaped death by covering himself in his Fellows "blood and gore". Later, he was rescued by passing Natives  (who cared for him until he was rescued by a French Merchant Ship).

Determined to revenge, Francois recruited a Crew and procured a Ship. He set about on the late 1660s raiding Spanish Shipping. He would specifically torture and murder the crews taken. All manner of horrible and painful tortures were visited upon Spanish Sailor's (in revenge for what was done to him). One element of his "legend", had him cutting out the Liver of a Spanish Captain and eating it before his dying eyes! His infamy grew daily. So much so, that Spain recruited a "Special Fleet" to deal with Francois.

By this time, Francois had nearely 600 Pirates and 4 Ships. He and his Fleet took Millions in Spanish Gold, Jewels and Slaves. Not only Ships, but Francois was also noted for attacking Coastal Towns and Garrisons. His most noted was his Raid on Maracaibo.

It was this Raid that was his "swan song". Escaping with his loot, his shop ran afoul of 4 Spanish Warships. Crippled and battered, Francois amazing escaped. His badly damaged Ship was said to have run aground of a small Island  (in essence Shipwrecking him). It was said the local Natives were Cannibals. They captured him and - as his legend states.....he was eaten! 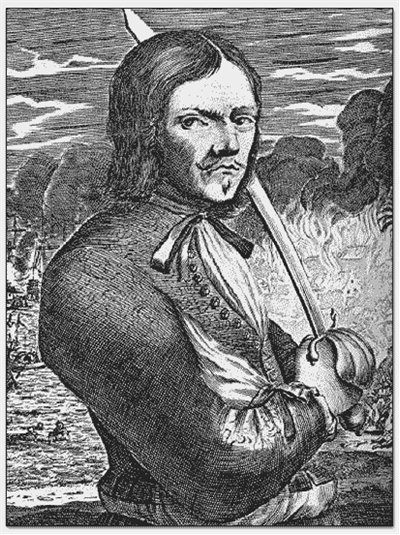