Born in 1400 A.D. In Florence, Italy – Fra. Angelico (aka Guido de Pietro), is considered the first transitional painter who led Art from The Middle Ages to The Renaissance Era. From a poor background, de Peitro was able to secure entrance into The Dominican Religious Order as a Brother. Always a Drawer, his skill and talent was obviously something seldom seen in his Era. His Superiors allowed him to use oil paint, which he began to use to paint paintings of such tranquility that they were something not seen before. Angelico began to incorporate The Bible into his painting themes. His fame soon rose (even to The Vatican in Rome).

Asked to come to Rome to paint frescoes, The Pope also allowed him to set up a School (which attracted many future Renaissance Artists). Some of Fra. Angelico's best frescoes still exists at The Convent of Santo Marco (Florence). His best know work in Rome is “The Life of Christ”, which features 35 “scenes” from the life of Jesus Christ. The majority of Fra. Angelico's works were lost in The Vatican Fire of 1447. He was promoted to his Order's Prior in 1449. In between his Administrative duties – he still continued to paint. By 1435, his eyesight had deteriorated to such a degree that he could not longer paint. He retired to a later life of prayer until his death in 1455. 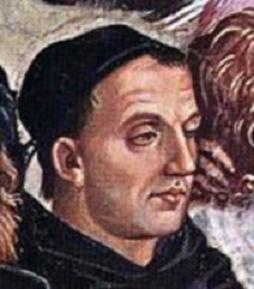