Churches have always been a focal point for protection of a local populace since organized religion began to construct permanent structures. Often, more larger Churches and Cathedrals were well built and designed to last centuries. The “latest” building and engineering techniques were often used (sparing no expense) inbuilt these structures. It was no stretch to begin to see such building as a possible military solution to invasions and attacks by one's enemy. Thick walls, Embrasures and Battlements were often incorporated in the specific Church. Often separate from defensive structures such as Castles and Fortifications, most of a moderate population could be evacuated into a Church for protection. In some cases, defensive walls were also added as an extra form of protection.

Although a contradiction to the actual “use” of the building as a religious site, cannon platforms were built into some Church roofs for use against an enemy, as well as using them to store weapons and in - some cases, large stores of gunpowder. Various Churches in France and England (as a result of The Hundred Years War as well and The English Civil War) – saw the advent of fortification. The idea of fortifying Churches even carried over into The New World, with many European Colonies building Churches for use as a possible military defense structures. 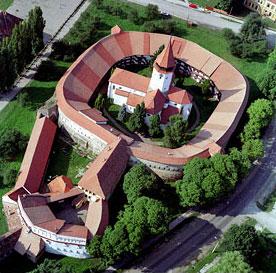