Located on Sullivan Island (South Carolina), Fort Moultrie can be used as the template for 171 years of American Coastal Defense technology. Building began by Colonial Militia during The American Revolution (1776). Militia originally used the unusually strong Palmetto Tree (cut into logs) as the first defensive walls built. Attacked by a British Fleet (almost immediately) – the Palmetto logs absorbed much of the shell impact (due to their soft, yet strong nature). Fort Moultrie did not fall and the engagement galvanized the Patriot's courage. It was also at Fort Moultrie, that The Palmetto Flag was first flown. Moultrie was eventually captured by British Forces (who held it until 1782). By 1803, all wooden structures at Moultrie were replaced by brick and mortar.

The latest in early “Federal” technology was incorporated into Moultrie. The newest Coastal Guns and building designs, all were used. Fort Moultrie was enlarged to accommodate a garrison of 500 men. Moultrie was part of the important Charleston Coastal Defense Line (to include Forts Sumter, Picnkney and Johnson). The great Seminole Indian War Chief Osceola (leader of The Seminole Indian Wars in Florida), was detained at Fort Moultrie. Dying in captivity of malaria, he was buried (and still is) outside Moultrie's Main Gate. Falling in Confederate hands (as all of the Defense Forts of Charleston did) at the start of The Civil War, it too was “targeted” by The Union Blockade to be “rendered”.

Union Ironclads consistently bombarded Fort Moultrie (these class of ships being the few who could get close enough to attack and not be severely damaged or sunk). Although damaged, Fort Moultrie did not suffer as badly as others did. Modernized in the 1870s by The US Army Coastal Defense Corps. - massive concrete bunkers were constructed as were newer (and larger) calibers of Coastal guns, added. Although plans to add more “up to date” artillery pieces were planned for World War II, the renovation plans were scrapped. In 1947, The US Army officially de-commissioned Fort Moultrie after 171 years of service. The Fort was turned over to The National Park Service in 1960 (who set about renovating the Fort to it's 1860s state). It is a popular tourist spot to this day (featuring many fine examples of preserved 18th and 19th Century Coastal Guns). 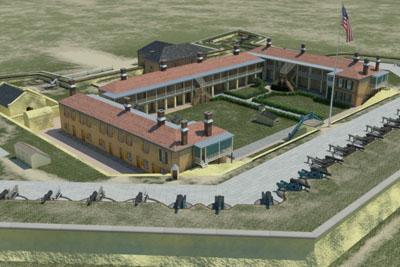