Fortifications on Old Point Comfort (a natural peninsula extending outwards from the coast of Virginia into Chesapeake Bay), go back to the first English Colony of 1607. It's natural wide and non-marshy land made an ideal location for a Fort. Constructed of stone, it is a seven-sided structure (considered one of the largest stone forts built in America). Originally named “Fort Algernourne”, it also featured a “Medieval” Moat Defense System (fed by The Bay). It was renamed after President James Monroe in 1834. It encompasses some 200 acres of land. A lighthouse was also constructed on the Military Reservation as an asset to passing shipping. Final retrofitting of the Fort was completed by a young Engineering Officer, Lieutenant Robert E. Lee (who would in later years be in command of The Confederate Armies).

The Fort saw no activity during The War of 1812 (but was garrisoned with some 300 soldiers). Fort Monroe featured a massive collection of heavy coastal guns (possibly more than any other Coastal Fortress combined). It was nicknamed “The Gibraltar of The Chesapeake”. Two smaller Forts “Wool” and “Rip Raps” were constructed adjacent to Monroe in the 1830s. Fort Monroe played a key role in the defense of Washington D.C. (a scant 125 miles North). After Virginia left The Union, Fort Monroe was the principle (and only) defensive structure – that far South. Fort Monroe served as the primary “land supply point” for The Union Naval Blockade against The South. Fort Monroe also is famous (in a word), for being the site of Federal Ben Butler's “Contraband Experiment”.

The General determined that any escaped Slave who “made it” to Monroe was “War Contraband”, and did not have to be returned to their previous Masters. Pressing them into impromptu “Service” (and identifying them by their red issued trousers), The Contrabands preceded the better trained Colored Troops which would be pressed into service after Lincoln's Emancipation Proclamation. During The Great Battle of Hampton Roads (1862), which featured the now famous “Battle of The Ironclads” (Monitor and Merrimack), Fort Monroe provided artillery support during the battle. The Fort also served (in a small role) as an early Prison Facility for captured Confederates. Fort Monroe also became one of the “first” US Forts to be garrisoned by an all Black Regiment (an Infantry and a Cavalry Regiment). Still used as a US Army Post after The War, in 1907 – The US Army Coastal Artillery School was opened and operated there. Most of the Civil War structures were removed in lieu of new barracks, libraries and classrooms.

The School remained at Fort Monroe until 1946. During World Wars I and II, Fort Monroe was part of the “Anti-Submarine Netting” systems setup in many US Bays and Harbors. Fort Monroe remained an Active Duty Post (becoming the home of The US Army's Training and Doctrine Command – TRADOC), until it was decommissioned in 2005. Today, Fort Monroe is operated (in part) as a Historic Park and Museum. The Virginia Sciences and Technology School (for gifted youth), now occupies the old School grounds. 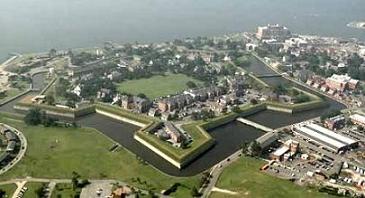