Built between 1826 and 1834, Fort Macon (North Carolina), was constructed to protect the valuable access points to “inner” North Carolina (via water inlets from the Sea). Originally built on the site of a much older wooden fortification (1756), the inlet was used by many infamous Pirates (including Blackbeard), to hide and split up their ill-gotten prizes. When built by The British, they used Fort Macon as a staging point for sea operations in the Region during Queen Anne's War (known as The French and Indian Wars, in The Colonies) – against The French. By 1807, The US Government began to rapidly expand it's construction of coastal defense fortifications along it's coasts. Fort Macon was replaced by a hexagonal stone masonry fort. Featuring 4.5 foot thick defensive walls, Casemates were constructed for large caliber artillery pieces.

Guns were positioned facing Seaward (due to the adjoining swamp and marshlands, attack from the Landward side was considered an impossibility).
The Rebels did not hold Fort Macon long. In 1862, Federal Forces invaded North Carolina and issued orders for the Forts surrender. Several Infantry Regiments and Heavy Artillery Batteries “surrounded” Fort Macon. After an 11-hour “siege”, Rebel Forces surrendered the Fort. The “siege” was also important, as it was the first time “rifled” artillery pieces were deployed against a fortification in American warfare. The US Army re-occupied Fort Macon until 1877. During this time, due to a lack of Federal (and Civilian) Prisons, Fort Macon became the local “penitentiary” for both Military and Local violators alike. By 1903, Fort Macon was de-activated as a Military Post.

It sat abandoned until 1923, when it was placed on Public Auction. Purchased by The State of North Carolina, many of the original Fort was demolished (due to poor maintenance in light of constant exposure to the Sea). Turned into a State Park (now a Historic Park), a large portion of the Fort's defensive perimeter walls and some inner structures have been repaired and conserved. It is open free to The Public. 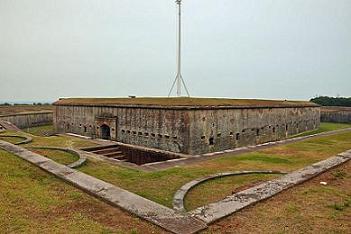