With it's ruins located in Jefferson Parrish, Louisiana – Fort Livingston was (as one point in it's history) – a classic Pentagon-style Coastal Defense Fort. Name for The Mayor of New York City (Edward Livingston), he had served in many important Government positions for then President Andrew Jackson. Constructed in 1834 (and completed in 1840) – Fort Livingston was purportedly used by Pirate Captain Jean Lafitte as a hideout. Livingston is also the only Defense Fort that was built in The Gulf of Mexico. A Lighthouse (to aid in shipping) was also constructed (1856). The final construction and placement of the 15 heavy Coastal Defense cannons – were planned by future “hero” of The Confederacy (at The Battle of Bull Run), General Pierre Beauregard. At the start of The Civil War, some 300 men were garrisoned at Fort Livingston. Although they gallantly attempted to defend the approach to New Orleans (during Union Admiral Farragut's daring and successful attack), Fort Livingston fell. After The War, no maintenance or care slowly reduced Fort Livingston to a ruin In 1923, The US Army ceded The Fort to The State of Louisiana. It is now preserved as a wildlife Conservation Site (although a fair portion of the Fort's defensive walls are still present). The location cannot be visited by the Public. 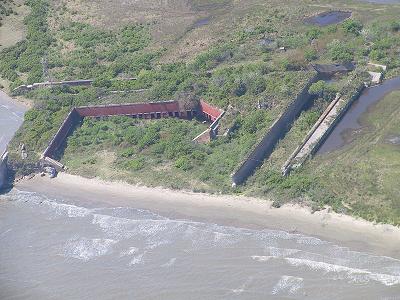