Located 40 miles North of the mouth of The Mississippi River in Louisiana, Fort Jackson was constructed between 1822 and 1831 – to provide defense to New Orleans. Star-shaped, it featured a Horn Work scheme with Courvances. Designed to hold up to 150 heavy caliber Coastal Guns (mostly 10 to 15-inch Columbiad Cannon), it was a formidable defensive structure. The Mississippi River fed a Wet/Dry Moat Defensive System (landward). As the river flooded marsh and swampland nearby, Fort Jackson was practically inaccessible from ground assault.

Designed to hold a Garrison of up to 500 men, Jackson normally operated with several hundred during most of it's service. Quickly occupied by Confederate Forces at the start of The American Civil War (in Louisiana) in 1861, the Rebels held Fort Jackson until early 1862. A Flotilla of Union Warships and Gunboats (under Admiral David Farragut), assaulted The Fort for 12 days. Confederate commanders refused to surrender. The garrisons soldiers “mutinied” against them (rather than face annihilation).

The Fort surrendered. Fort Jackson was retaken by Union Forces (who in turn used it for support of their troops, as well as a prison). Of note, famous European Champagne Magnet “Champagne Charlie” Charles Heidsieck was held for a year as prisoner on charges of spying for The Confederacy (a charge he denied). Fort Jackson continued being garrisoned by The US Army after the end of The War. The Fort was used as a training reservation during World War I. De-activated in the 1950s, it fell under control of The States of Louisiana (who turned it into a National Historic Park in 1960, after renovations). Due to high storm tides from Hurricanes Katrina and Rita (2005 and 2007), Fort Jackson has flooded and is danger of being lost. The State is attempting to repair The Fort. 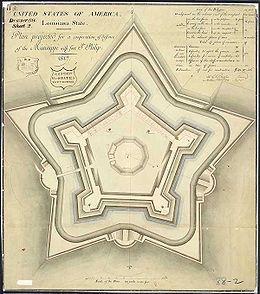