Originally known as Fort Fletcher (after the Kansas Governor of the time), it was only open for 1 year (at first). As “Fletcher”, the small and un-Stockaded facility was supposed to protect the Butterfield Stage Company Sub-Station (built there). A Company of US Cavalry was assigned the task of protection. Effective, The Army closed Fort Fletcher until 1867 (with the bankruptcy of the Stage Line). However, increased attacks by Native Americans in the Region, caused The Army to “reopen” the Fort, this time calling it “Hays”. As Fort Hays, the military facility grew very fast.

Used as a “storage facility” for other nearby Forts (with a 45 mile radius) – Hays never really had a containment Stockade or Palisade built. Most other structures (or what one would find inside a Fort), were built (within close range of each other. The Fort grew to around 7,500 acres – as more and more Settlers and civilians came to the area. Some of the most famous names in Western history “passed through” or stayed briefly at Fort Hays (“Wild Bill” Hickok, Wyatt Earp, Doc Holiday, even Colonel George Custer command a detachment at Fort Hays).

At the start of The Great Plains Indians War, Fort Hays became a main deployment location for many Units (including the famed 10th Cavalry – The “Buffalo Soldiers”). With upwards of some 5,000 civilian and soldiers living in the area (and the many thousands that passed through), it is of no shock at a major Cholera epidemic broke out. This actually “thinned out” many of the civilian population. By 1889, The Army had de-commissioned Hays (wishing to use it as an Old Soldiers Home). Given to The US Department of Agriculture in 1895, Fort Hays was ceded over to The University of Kansas. Several of the military structures have been preserved (rebuilt). 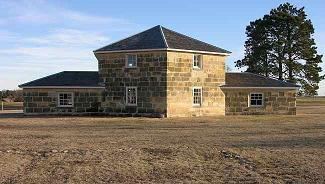