A “classic” American Frontier Fort, Griffin was constructed in 1867 (and garrisoned by 4 Companies of The 6th US Cavalry). Commanded by Lt.-Colonel J.D. Sturgis (a non-participant/survivor of The 7th US Cavalry at The Little Big Horn) – Fort Griffin was an “early example” of wooden Frontier Forts that (on occasion) used brick or mortar for interior construction. Located (now in Shackelford County, Northwest Texas) – it's principle mission was to protect Settlers from hostile Native Americans. It also served as Federal Authority in the Region during Texas' Reconstruction (after The Civil War). Originally part of The Texas Southwest Defense Line, Griffin and 14 other “local” Forts were constructed down the center of Texas (from the far South to the extreme North). By 1868, the 17th Infantry Regiment (" The Buffalo Soldiers") was assigned to augment the Garrison. In 1870, a small frontier town known as “The Flats”, developed around Fort Griffin. A “stop-over” town for some, it serviced the soldiers as well (with a variety of pleasures!). At one point, Marshal John Stelmen worked the Town (Stelman was made famous for eventually killing John Wesley Hardin). Griffin was also briefly visited by Civil War hero General William Sherman. The Fort was de-commissioned in 1879. The nearby “Town”, did not last much longer either. Today, all that remains of Fort Griffin is the original Bakery (brick) Building. Future plans call for possibly reconstructing other buildings. The Historic Site is care for by The State of Texas. 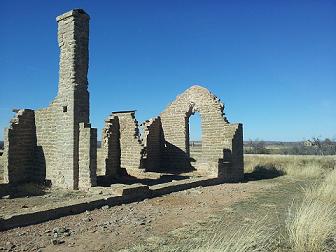