Built in 1855 on the Island of Hokkado, Japan – Fort Goryokaku was based on the French Vauban-Style of fortress building. Seat of Government for the short lived “Republic of Ezo”, the Fort featured as many as 250 cannon of various calibers – positioned in such a way, to to produce overlaping fields of fire (an innovative idea for Japanese military thinking at the time). Featuring barracks, storerooms, food storage, armories and weapons manufacturing facilities, Goryokaku was a literal “small City”. At it's short lived “peak”, some 5,000 men garrisoned the Fort. Famous for the last battle of The Boshin War (which courted French assistance for The Loyalist Forces), - some 3,000 fell during the siege. Largely untouched by World War II bombing raids, much of The Fort had been lost to Nature. However some structure foundations and walls still exist. The Fort has become a large Garden area which attracts many Visitors. 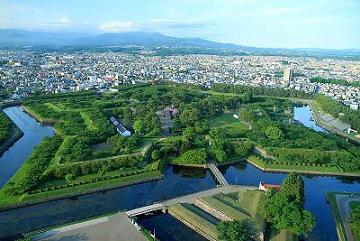