Built in 1754, Fort Cumberland (which was located in Cumberland, Maryland) – was an important economic and military site in the Region. Built on an overlook of The Potomac and Wills Creek confluences – Fort Cumberland was a rally point for British General Edward Braddock during The French and Indian Wars (in The Colonies – 1755). Considered the Western most extent of British influence, a young Virginia Militia Officer named George Washington – lead his troops back to Fort Cumberland, after their ill-fated expedition against The French at Fort Duequesne (near present day Pittsburgh, Pennsylvania). Fort Cumberland was an entirely wooden structure. The Fort was roughly 200 yards by 45 yards. A wooden perimeter wall was constructed from local forests. Each tree was around 25 feet long (with half of it's length embedded into the ground). 4 wooden interior structures were built, to serve as barracks, storehouses and Officers quarters. A large powder magazine was also built (partially underground). After The War, Fort Cumberland saw saw limited used by The US Army (a Dragoon Company was stationed their briefly). Abandoned in the 1820s, Fort Cumberland caught fire and was burned to the ground. Presently, a Church occupies a portion of Fort Cumberland. A detailed model (commissioned by The Church), is on display – there. 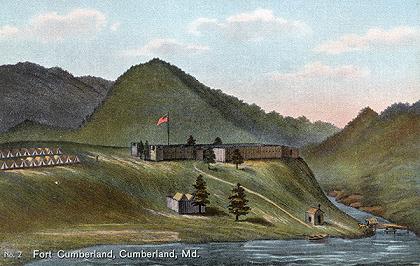